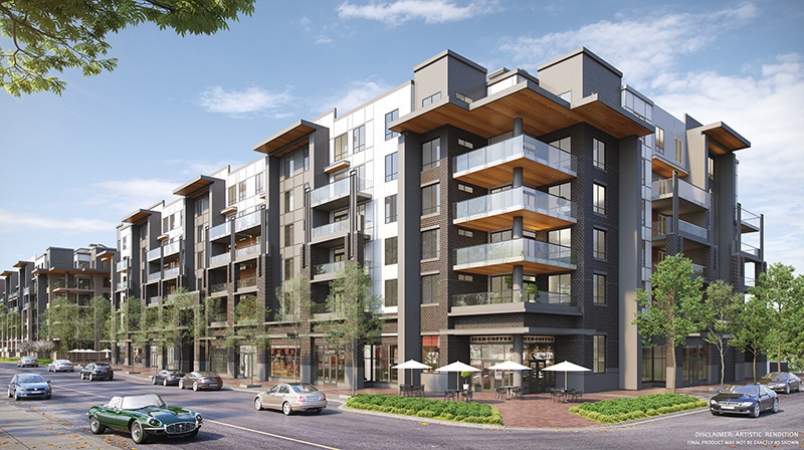 A series of changes made by The Panatch Group to its proposal to build 358 condo units at 50 Electronic Ave. seems to have won the favour of Port Moody council.

At its meeting July 10, council gave third reading to a series of bylaw amendments that would allow the project — two six-storey buildings with 18,000 sq. ft. of commercial space on the ground floor of the western building — to proceed.

When council gave the project first and second readings in June, some councillors expressed reservations about its lack of affordable units, impact to traffic on Murray Street and a lack of community amenities beyond a commitment to a public art project.

END_OF_DOCUMENT_TOKEN_TO_BE_REPLACED

The material provided herein is for general information purposes only and is not intended to depict as-built construction designs. The developer reserves the right in its sole discretion to make modifications or changes to the building design, floor plans, specifications, finishes, features, prices, materials, equipment (including appliances) and dimensions. Dimensions are approximate and have been calculated from preliminary survey measurements. Actual final dimensions of construction may vary from those set out herein. As reverse, flipped and/or mirrored plans occur throughout the development please see architectural plans if this is material to your decision to purchase. Please see disclosure statement for specific offering details. E&O.E. VIEW PRIVACY POLICY

The material provided herein is for general information purposes only. Please see disclosure statement for specific offering details.The developer reserves the right to make changes and modifications to the information herein without prior notice. E&OE. VIEW PRIVACY POLICY

Thank you for your interest in 50 Electronic Avenue.

We look forward to connecting with you about upcoming Panatch Group developments and hope to welcome you into one of our future communities soon.